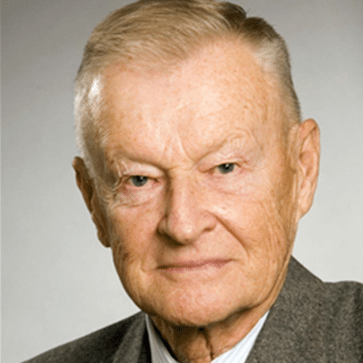 Zbigniew Brzezinski is a CSIS counselor and trustee and cochairs the CSIS Advisory Board. He is also a senior research professor of international relations at the School of Advanced International Studies, Johns Hopkins University, in Washington, D.C. and a member of the International Advisory Board of the Atlantic Council. He is a former chairman of the American-Ukrainian Advisory Committee. He was a member of the Policy Planning Council of the Department of State from 1966 to 1968; chairman of the Humphrey Foreign Policy Task Force in the 1968 presidential campaign; director of the Trilateral Commission from 1973 to 1976; and principal foreign policy adviser to Jimmy Carter in the 1976 presidential campaign. From 1977 to 1981, Dr. Brzezinski was national security adviser to President Jimmy Carter. In 1981, he was awarded the Presidential Medal of Freedom for his role in the normalization of U.S.-China relations and for his contributions to the human rights and national security policies of the United States. He was also a member of the President’s Chemical Warfare Commission (1985), the National Security Council–Defense Department Commission on Integrated Long-Term Strategy (1987–1988), and the President’s Foreign Intelligence Advisory Board (1987–1989). In 1988, he was cochairman of the Bush National Security Advisory Task Force, and in 2004, he was cochairman of a Council on Foreign Relations task force that issued the report Iran: Time for a New Approach. Dr. Brzezinski received a B.A. and M.A. from McGill University (1949, 1950) and Ph.D. from Harvard University (1953). He was a member of the faculties of Columbia University (1960–1989) and Harvard University (1953–1960). Dr. Brzezinski holds honorary degrees from Georgetown University, Williams College, Fordham University, College of the Holy Cross, Alliance College, the Catholic University of Lublin, Warsaw University, and Vilnius University. He is the recipient of numerous honors and awards. Most recently, Dr. Brzezinski was awarded the de Tocqueville Prize in 2011 for his contributions to the political science field. His many books include Strategic Vision: America and the Crisis of Global Power (Basic Books, 2012); America and the World: Conversations on the Future of American Foreign Policy (Basic Books, 2008), coauthored with Brent Scowcroft and David Ignatius; Second Chance: Three Presidents and the Crisis of American Superpower (Basic Books, 2007); and The Choice: Global Domination or Global Leadership (Basic Books, 2004).