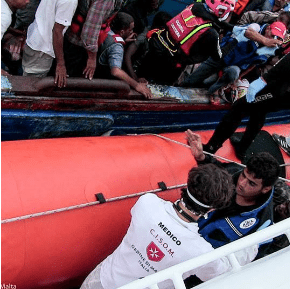 The latest figures speak of over 300 dead. The Pope’s appeal

“Say what you like, but when you’re on a patrol boat in a force-8 sea and you go to rescue a small, half-deflated and sinking dinghy over 100 miles out, it’s more likely that you won’t find anyone than you’ll be saving lives,” says Mauro Casinghini, National Director of the Order of Malta’s Italian Relief Corps, the day after the new tragedy off Lampedusa, in which over 300 immigrants died. A figure which is rising by the hour as the survivors testify to four dinghies departing from Tripoli with 460 refugees on board, including women and children, mostly coming from Mali, the Ivory Coast, Senegal and Niger.

The bad weather conditions caused one boat to sink a few miles out of Libya, while another lost air not long after and the third started to ship water. The Italian Coastguards managed to save the fourth dinghy last Monday with over a hundred

immigrants aboard, of whom twenty-nine were dead from hypothermia. The doctors, nurses and rescuers from the Order of Malta’s Italian Relief Corps were also on board the patrol boats. Since 2008 they have been present on the island of Lampedusa with teams embarked on the main Coastguard and Navy vessels as well as the Finance Police boats.

“Not even the largest vessel, except for the Class 300 patrol boats – those with the orange dinghies – could have arrived faster to rescue the immigrants, already in serious difficulty, besides being exhausted,” Mauro Casinghini told us. “The Order of Malta’s people have helped to achieve a miracle, saving a least 70 refugees who without the intervention of those patrol boats would have ended up like all those other hundreds and hundreds who lie on the bottom of the Mediterranean”.

Just as in other similar tragic events, the Order of Malta’s Relief Corps’ psychologists arrived in Lampedusa to assist the Coastguards’ personnel and the Order’s doctors and nurses already present.

There was also the appeal of Pope Francis who, in his Wednesday audience in St. Peter’s Square, expressed his profound sorrow for yet another disaster at sea and added: “I wish to ensure you of my prayers for the victims and once again to encourage solidarity, in order that no one lack the necessary aid”. 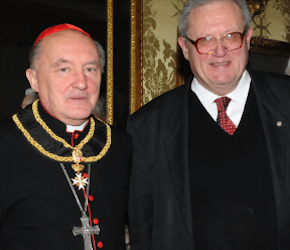 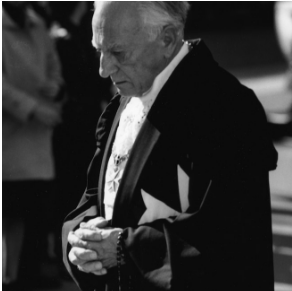 A man with an intense spiritual life and profoundly convinced of the need to continuously strengthen the international solidarity network, Andrew Bertie was admitted to the Order when he was only 27 and devoted his life to prayer and charitable works, honouring the task entrusted to him until his death after illness in February 2008. Fra’ Andre Bertie oversaw great changes within the Order of Malta such as the expansion of the humanitarian activities and the reform of the constitutional charter. His legacy also includes a renewed emphasis on the spiritual life of the members of the Order. Furthermore, during his magistery, the Order’s bilateral diplomatic relations rose from 49 to 100.

In office from 1988 to 2008, Grand Master Andrew Bertie’s life was always inspired by principles of faith. His profound spiritual and human virtues, and not least his commitment to practise the Order of Malta’s founding motto “witnessing the faith and assistance to the poor” (Tuitio Fidei, Obsequium Pauperum), meant that in February 2013, only five years after his death (the minimum term envisaged by canon law) the request to initiate the procedure for his Beatification and Canonization was presented. This was a significant anniversary, because in that year the Order of Malta celebrated the 900th anniversary of its official recognition by Pope Paschal II.

The work Fra’ Andrew Bertie performed during his lifetime was for many an example of moral integrity and spiritual inspiration, hence his many faithful followers both in Italy and abroad, and in particular in those countries where the Order of Malta is present with its humanitarian activities. 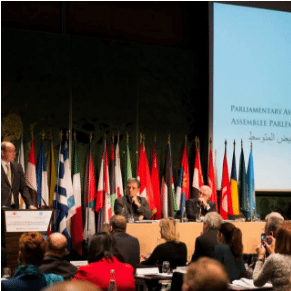 The 9th Plenary Session of the Parliamentary Assembly of the Mediterranean, hosted by the Principality of Monaco between 2 and 4 February last, officialised the Sovereign Order of Malta’s membership with the status of Associate State.

“Parliamentary diplomacy meets humanitarian diplomacy to continue efforts to assist civilians in emergency and conflict zones,” stated the President of the Parliamentary Assembly of the Mediterranean, senator Francesco Amoruso.

The Parliamentary Assembly of the Mediterranean and the Sovereign Order of Malta, with its membership validated during the Plenary Session, confirmed their joint intention to ensure that Mediterranean parliamentarians remain well aware of the humanitarian needs of conflict-affected populations. 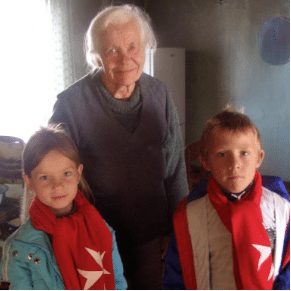 Over 80,000 meals distributed in 2014 by the Order of Malta’s Relief Organisation in Lithuania

Increase in services offered and people in need reached

The Order of Malta’s Relief Organisation in Lithuania (MOPT) ended 2014 on a high note. Volunteers’ efforts to help those in need increased significantly in terms of services offered and people reached. The organisation has been handing out hot meals since 1993 and now covers a total of 16 municipalities with the two new towns added last year. In 2014 volunteers distributed some 80,500 hot meals to 450 people. The number of people reached over the year has also grown along with the service, which now also provides food packs and food vouchers that can be spent in the shops.

Home visits by volunteers have also increased. Around 300 elderly people are involved, mostly fragile and sick or with financial problems, with an average of 100 visits a year for each assisted person.

Another fundamental activity of the Order of Malta in Lithuania is its support for disadvantaged children. In 2014 there were eight assistance centres in operation and two new facilities were inaugurated at the beginning of this year. A total of 225 young people were helped last year.

Also last year a new transport service for the disabled was launched, with 90 people participating in the project in the towns of Vilnius and Klaipeda.

Besides the first-aid courses organised in various schools nationwide, the Order of Malta’s Lithuanian volunteers prepared the annual “Malteser Soup” campaign to increase public awareness about those living on the breadline, the elderly and the sick. Plates of typical local soup were offered in squares in 30 Lithuanian towns. The campaign, in which the Vilnius government ministers and celebrities participated, ended the year with a fundraising concert broadcast on national television.